Once upon a time, there was a chap called Nicholas Graham, who (in 1985) started a company called Joe Boxer, which sold (and still sells) underwear. Nicholas Graham syled himself  ‘Chief Underpants Officer’. I have often wondered whether I should give myself a spurious title (rather than simply ‘Managing Director’ (of The Wordmonger Limited)) but, honestly, I’ve not been clever enough, to date, to come up with something that works.

And, let me tell you, Chief Content Officer is something that doesn’t work. I have difficulty with the concept of content anyway – it smacks of a term coined in desperation to describe a disparate and amorphous group of extraordinarily different concepts and products with the idea of somehow ‘bucketizing’ it (thank you, America), thereby rendering it somehow harmless, easy-to-understand and pigeonhole and – above all – non-threatening. The content conceit has developed in parallel with the proposition that we have never faced such corporate communication complexity and an entire industry has grown up around it, propagating fear and awe in equal measure and taking a large cut of the content investment it recommends.

So I’m not really a believer then.

Anyway, here you are, snorkellers, here’s a piece from Forbes, asking the question ‘Do organizations need a Chief Content Officer?’ and, as far as I can see, failing, abysmally, to answer it.

Apart from the fact that I started to get a headache when I read this – which is a sure sign that it’s more complex than it needs to be – it’s also got a diagram, reproduced below.

Which, frankly, gives me the heebeejeebies.  This is trying to put a forced order onto a naturally chaotic process. Trying to define what things are, identify where they come from and map out where they go. This is trying to create a science around what is essentially an art. This is all about complicating something intuitive with badly-drawn rules. I could go on.

Content? It’s the same old stuff that we communicators have been producing since time began, with a few new bits. Audiences? The same old audiences, with some new points of access. And the audiences vary from topic to topic, product to product, concept to concept – there is no hard and fast set of messages or basket of content that will suit every audience, every time (what you tell your investors will be different to what you tell the community in which you operate and different again to what you might tell your employees). This is not to say that there shouldn’t be a single central theme on which you hang the audience-driven elements – but still, trying to diagrammatize it (thank you again, America) is a pointless exercise in navel-gazing – thought and talk, for thought and talk’s sake. 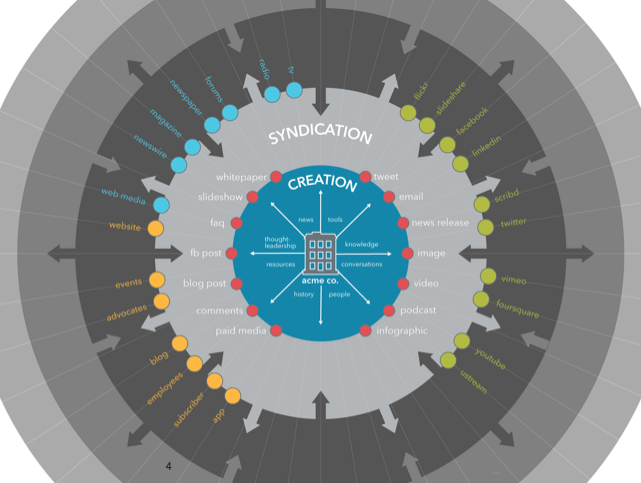